This service has passed. Please find the recording below or check back soon for this coming Sunday.
We're going live: 06 September 10:00am Watch on YouTube Here are few options to give your offerings:

Other giving option for offerings only is through GIVEWAY- GIVE ONLINE Great Is thy Faithfulness

Thomas Obediah Chisholm was born in a log cabin in Franklin, Kentucky in 1866. He received his education in a little country schoolhouse, and at age 16 began teaching at the same school. He became a Christian at age 27, and with no college or seminary training was ordained to the Methodist ministry at age 36. Chisholm served as a Methodist minister for a year, but ill health made it impossible for him to continue. He moved to Vineland, New Jersey, where he opened an insurance office.
Chisholm wrote hundreds of poems during his lifetime. In 1923, he was inspired by Lamentations 3:22-23 to write the text for the hymn, “Great is thy Faithfulness.” Those verses are as follows, “The steadfast love of the Lord never ceases, his mercies never come to an end; they are new every morning; great is your faithfulness.”
He suffered ill health most of his adult life and therefore had a smaller than average income. Of this circumstance he said, “God has given me many wonderful displays of his providing care, which have filled me with astonishing gratefulness.”
Chisholm sent the words to one of his poems, “Great Is thy Faithfulness” to his friend, William Runyan, and Runyan wrote a musical setting.

Nearer, My God, to Thee
Sarah Flower Adams was a young woman of 43 when she died in 1848, and her home was at Harlow in the English county of Essex. Her hymns are more widely used in America than elsewhere, particularly amongst Unitarians.
Nearer, My God, to Thee is based on Jacob’s dream (Gen. 28:12) in which the ladder, set up on earth, reaches to heaven, a vision which the writer deftly weaves into her hymn. Kids – make sure you check with your parents or another trusted adult before clicking on any links!

Read the story from the bible, watch the video above and check out all the activities in
[email protected]’s Sunday Pack. 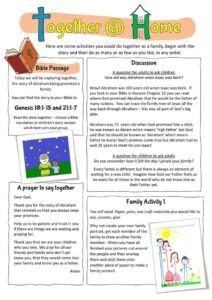 Contact the church office to join a Sunday in Homes group We also have regular updates in our Kids Church Facebook and WhatsApp groups. Contact Emma or the Church Office to join.

Check out our worship songs above, or explore some of the other worship music selected by our musicians on the service pages.

Have a look at the ideas for remembering the memory verse in Together @ Home. You could use the ideas to help remember our monthly verse, the weekly verse or another verse that is important to you. 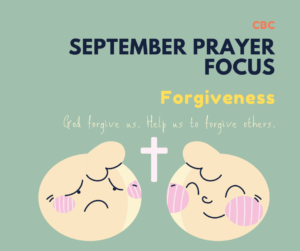 This month our prayer focus is Forgiveness. God forgive us. Help us to forgive others.

You can also check out the prayer ideas in Together @ Home material each week, jump onto the CBC Facebook page to add a prayer request, or send in a photo to Oliver & Mei. 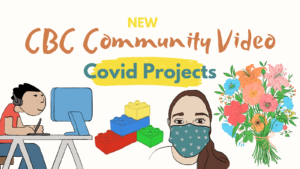 Our next CBC Community Video theme is Covid Projects.  Please send your photo or video to Emma by Sept 20th. “Gone, gone, now my sin is dead and gone.” This song is such an anthem for the freedom we have in Christ.

May this playlist help you find joy in God and be free from the bondages of sin. It might be the chorus of people singing or the words that truly resonate with you.

Whatever it may be, let’s have fun praising Jesus and rejoice in him.